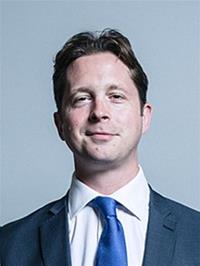 Title: MP for Brentwood and Ongar

More information about me

Brentwood is not responsible for the content of any external link

Alex Burghart was first elected in Brentwood and Ongar on 8th June 2017 with a Conservative majority of 24,002. He was re-elected on 12th December 2019 with an increased majority of 29065.

Alex is a former teacher and the son of two teachers. The first person in his family to go to university, he read history at Oxford before taking his doctorate at King’s College London where he taught and lectured.

He then worked at the Department for Education on the Munro Review of Child Protection, before spending four years as Director of Policy at the Centre for Social Justice where he led research on housing, welfare, education, and family policy. Between 2016 and 2017 he was a Special Adviser to the Prime Minister on social justice in 10 Downing Street.

He was a member of the Board of Yarlington Housing Group, was a governor at Queensmill School for children with autism, and has written for the Spectator, the Times Literary Supplement, and the Evening Standard.

In Parliament, Alex became Parliamentary Private Secretary to the Prime Minister, Boris Johnson in July 2019. Alex has been a member of the Work and Pensions Select Committee and the Joint Committee on Human Rights and was previously a PPS to the Attorney General, The Rt Hon Geoffrey Cox QC MP, and to the Northern Ireland Secretary of State, The Rt Hon Karen Bradley MP.   He was also Co-Chair of the All-Party Parliamentary Group on Adverse Childhood Experiences.